“Oh she’s so cute,” Marlie says as she snuggles with Lucy.

“Look how much hair she has,” comments Gina. “There’s tons on the top of her head… Uh oh…”

“Is there something wrong?”

I’m afraid her cradle cap has gotten worse or maybe she’s scratched herself again, but I can’t see anything wrong with her head.

Marlie and Gina both start to giggle. I’m not sure why my Filipino* friends are laughing at the top of my daughter’s head.

*I don’t usually describe my friends by their nationality, but it will make sense further along in the story. 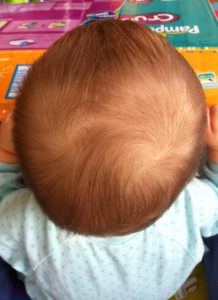 While Marlie holds Lucy and giggles, Gina points to the two cowlicks on Lucy’s head and says “She has two.”

I know she has two cowlicks. My friend Christina, who is a hair stylist, pointed that out a few months ago. She said it could make styling Lucy’s hair a more difficult, but other than that it’s not a big deal.

Judging by Marlie and Gina’s giggles, though, I’d say they know something I don’t know.

“Is there something wrong with that?” I ask.

“It means she’s going to be naughty,” Gina says matter of factly.

“Two crowns means she’s going to be naughty,” Marlie repeats. My little angel, Lucy? No, it can’t be. “Naughty and mischievous,” Marlie adds with a smirk.

As soon as I tell Mark the story, he’s on his laptop googling it. He finds a couple references to something called “giri giri.” According to e-hawaii.com, giri giri is “the swirly part in an Asian person’s hair, usually in a circle.” And there are tons of posts referencing a Filipino belief that someone who has two giri giris will grow up to be a little bit naughty.

Not fully trusting google, Mark decides to call an expert: his mom. She has a Filipino/Hawaiian background so she should be able to tell us if there’s any truth to this.

“Oh yes,” she says when he gets her on the phone. “It’s pronounced giddy giddy. I noticed that the day she was born (http://twitpic.com/51x3o5), I just didn’t want to say anything.”

Let’s hope Christina is the one who’s right. 😉