“Did she say just a half?” The woman asks her friend, pointing at me.

“No! Well yeah… but what I meant was I didn’t do the full marathon, I just did the half,” I tried to explain.

As I had gotten on the bus after the BMO Half Marathon, the driver pointed at my medal and said “You did the marathon.  Congratulations!”

I tried to explain that I just did the half, not the full marathon. But as I was explaining, two women, who were also wearing their half marathon finisher medals around their necks, got on the bus behind me.

That’s when the one said “Did she say just the half?”

I didn’t mean to diminish the fact that I, and these two women, had run 21.1 kilometres. I only wanted to explain that I didn’t run 42.2 kilometres; I didn’t run a full marathon.

I kept rambling my explanation of the word just as the women and I walked to the back of the bus. 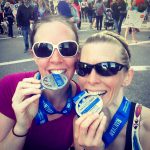 One said “I don’t think I’ve ever used the word just when describing a 21.1 kilometre run. There’s no just in a half marathon.”

There’s no just in a half marathon.

She had a point.

I did a half marathon, dammit!

No just about it.