(I’ve tried to protect my not-so-innocent child by not referring to him or her by name or gender.)

None of it has worked.

My six year old has spent the last 25 minutes in our tent, losing their mind because they can’t decide whether to wear shorts or pants today.

That’s it. That’s the whole reason our friends, our fellow campers and I’m sure a few wild animals far off in the hills, have heard screams of anger and frustration (from both of us) for the past 25 minutes.

We’re camping with friends in Golden Ears Provincial Park. The weekend has gone quite well; a few minor meltdowns, but nothing more than is to be expected with two six year olds, a five year old and a four year old. Two nights of uneventful (in a good way!) family fun.

The plan was to go on a hike. And right now, six out of the eight of us, are enjoying a nice hike down by Gold Creek.  And the other two of us are sitting at the campsite. I’m sitting at the picnic bench, alternating between writing this and playing solitaire, while my six year old is holed up in our tent, trying to make a decision that is akin (to them) to solving all the world’s problems.

For whatever reason, deciding between shorts and pants has been the downfall this morning.  Mark, my husband, and I both went into the tent multiple times to help them decide.

“Wear shorts. Everyone else is.”

“We can roll up your pants.”

“Then wear pants and bring shorts and if you get too hot, you can change.”

“Where would I change? There’s no change room.”

“You can change in the bushes.”

“Someone will see me.”

“We’ll hide you and make sure no one sees you.”

That won’t work because the animals will still see me.”

I finally told the rest of them to leave. So they’re out on the last day of our camping vacation, enjoying a scenic hike, while I wrap it up like this… Knowing there is a ticking time bomb inside our tent, waiting for it to explode (again!) at the slightest provocation. 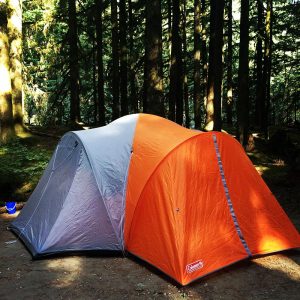 Since I’ve already yelled, ignored, threatened and guilt tripped, I’ll do all that’s left… Watch the time pass by and wait it out.

50 minutes in and the standoff continues….

After almost an hour, the time bomb finally emerged from the tent, in shorts, and (amazingly!) ready to apologize.