We Missed Our Nutcracker Entrance

I had already visualized our names in lights…

Alright… so maybe “starring” was a bit misleading. How about “guest starring?” Yeah… That may be a bit of a stretch as well. Maybe we could say “special appearances by…”

Yes, that would work.

🌟The Nutcracker: With Special Appearances By Amy, Lucy & Sam🌟

But now the wording doesn’t matter, because we won’t be there. We won’t be making a special appearance in The Nutcracker. We’re going to miss our entrance.

Sometimes my job has some pretty amazing perks, and this was definitely one of them. Lucy, Sam and I were invited to perform in one of the The Goh Ballet’s performances of The Nutcracker. We were supposed to be party guests in Scene 1.

Just the idea of being on stage in The Nutcracker was giving me some fabulous dancer flashbacks. Clara’s friend in Scene 1, a mouse in Scene 2, snow in Scene 3, marzipan in Scene 4, flower in Scene 5: I had done them all. But this time I was going to be on stage with my kids!

And I, as all my dance friends will attest, was ready for my entrance. 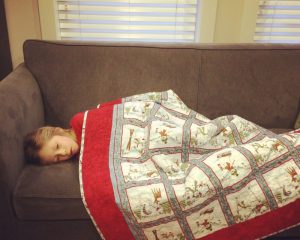 Until the flu hit.

Last night, the night before our big performance, Lucy got hit and she got hit hard.

She was down for the count. And as sad as she was to miss her performance (and her entrance!), there was no way we could let her go on stage.

… I had visions of Drosselmeyer making his grand entrance, slipping on vomit and taking out Clara… It would have been ugly.

Sam and I agreed we all wanted to do the show together, so if Lucy was out, we were too. (Plus I was afraid Sam would be inflicted with the same bug in the hours leading up to the show.)

So we’re going to have to miss out this time around.

Hopefully The Goh Ballet will have us back next year. I promise we’ll be ready for our entrance.

Visions of The Sugar Plum Fairy danced in her head. 🎼