After 20 minutes in line (a very reasonable amount of time- thank you Richmond Centre for your reservation system!), we’re finally the next family to meet with the Big Guy. While we’re waiting, Mrs. Claus asks Lucy and Sam about themselves; what they like to do, what grade they’re in, how many teeth they’ve lost. All the standard things you talk about with 7 year olds.

Then she asks us who would like to be in the photo with Santa. I told her just the kids.

“No, that’s okay ” says Mark, laughing a bit. We’ve only been in one Santa photo with Sam and Lucy, and that was out of necessity. (Lucy and Sam were 18 months old and screamed bloody murder when we tried to leave them on Santa’s lap.)

Mrs. Claus looks at Mark then looks at me.

“Yeah,” agrees Mark, looking down at his Captain America t-shirt.

Mrs. Claus stops moving and looks me right in the eye. “You have to be in a photo,” she says. “Look at them. They’re only this age once.”

As I looked at Lucy and Sam, all dressed up for their meeting with Santa, the looks of anticipation in their eyes, I realized she was right. The magic of Santa and his elves and his reindeer and Mrs. Claus and the North Pole… that magic is beautiful. And I want to hold onto it as long as I can.

I looked at Mark in his Captain America shirt. And I pictured myself in my wrinkled t-shirt, no make up and two-days-unwashed-hair, and I knew what we had to do. I knew the right thing to do….

We listened to to Mrs. Claus. 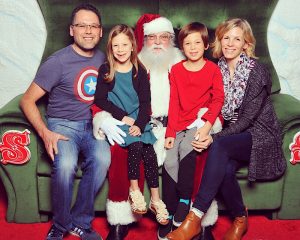 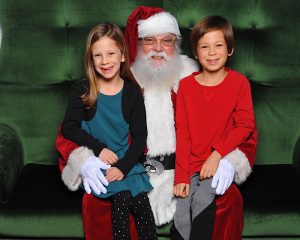