The ability children have to do a 180 never ceases to amaze me. Smiling to frowning, happy to sad, content to infuriated all in a matter of seconds. One minute the birds are singing, the sun is shining and all is right in the world. The next minute the gates of hell have swung open, hot lava is spewing out and an ear piercing scream starts to burrow it’s way into your brain.

And sometimes it goes the opposite way; the hot lava cools and the sun appears from behind dark clouds.

Both versions of the 180 blow my mind.

“They’re mine!” I hear Lucy screaming as they come around the corner, totally interrupting my calm and chill afternoon chat with my neighbour.

“No, they’re mine!” Sam yells in his twin sister’s face.

“What is going on?” I ask as I stand up, already grumpy that I have to deal with this.

“No, I didn’t! I had three and I put them in the bucket and now I want them back!”

“No, James put HIS in the bucket. You didn’t put any in there. And James gave me his jewels so these are mine!”

“No, James and I collected them together. And I gave mine to him. And then he put them in the bucket so these three are MINE!”

Half an hour ago, when I sprinkled the clear flattened marbles around the rock pathway for the kids to find, I had no idea this would be the end result. I purposely dropped at least 40 of them so there would be more than enough for all 11 kids in our complex to find. And everyone seemed happy with the treasure hunt… everyone except my kids.

“No good deed goes unpunished…” I mumble to myself as I walk over to my seven year olds.

“What exactly happened?” I say to them.

“Lucy,” I take a deep breath and start. “Sam did have some. Can he please keep those three? You have at least 20 in that bucket.”

“But they’re not all mine. Some are Ava’s and some are James’ and none are Sam’s!”

“Yes, they ARE!” Their faces flush as their volumes continue to increase.

“Give me a minute,” I say looking at Sam. Turning back to Lucy, I say “Sam and James were working together so some of those may be Sam’s jewels.”

“No, they’re not! When James left he gave me his jewels and he said he found them all on his own so Sam’s lying! And when he took those three from the bucket he STOLE THEM FROM ME!”

I try a few more tactics, attempting to get to come to some sort of consensus, some sort of agreement, some sort of truce. But nothing works. Neither of them will budge. Sam insists three of the jewels are his property. Lucy insists Sam has stolen them from her.

“I don’t want to deal WITH THIS!” I can feel my face flush as my volume increases. “Lucy, Sam can keep those three. You have more than enough,” I say in my most serious mom voice. “Conversation over.”

“I don’t want to talk about this again, got it?” Now I give her my most serious mom look.

“Yeah,” she says. As she turns away with her bucket I hear her mumble “They were mine.”

“Lucy!” I say in a threatening tone.

She keeps walking without saying another word.

Exhausted, I sit back down to continue the conversation that was so rudely interrupted. I deserve some sort of diplomacy award for attempting to keep the peace between them, I think.

Less than five minutes later, I see Sam walk up to Lucy with his hand out, jewels in his palm. Calmly he says, “Here Lucy. You can have them.”

Sweet as honey, Lucy replies “No, that’s okay Sam. You keep them.”

Just as sweetly, he replies, “No, really you can have them.”

The lava has cooled, the sun has appeared and once again, the 180… Blows. My. Mind. 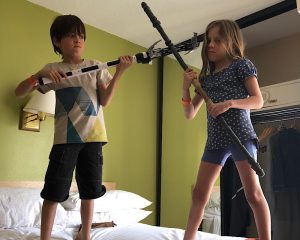 Photo taken during one of their ‘friendly’ battles.